You are here: Home / Testimonials / Another Rotater Success Story

The ROTATER: The Skinny   by Michael James

I first heard of The Rotater from Chris Melton on Twitter. He had seen where after twenty five years of racing motocross I was pretty much done and beaten up.  I was dealing with a shoulder ailment and he said he wanted to send me a product he thought would help. I was pretty skeptical at first since I didn’t know where he was coming from but Chris turned out to be the real deal…and his shoulder rehab device, The Rotater, is also the real deal.

First off, the Rotater, like all great ideas, is so simple you wonder why you didn’t invent it yourself.  The device in basic terms is used to help people recover from shoulder injuries and or rotator cuff issues. The Rotater allows the patient to use the device by themselves if they are dexterous enough or with the aid of an assistant to help them through the ranges of motions needed for a properly functioning shoulder. I won’t go into how to use the device for space’s sake but you can find all the info you need at https://therotater.com/wp/.

The shoulder is acutally composed of several joints

A little background on the shoulder joint: First off, the shoulder isn’t really a joint like the knee, hip, or elbow. The shoulder is a series of tendons and muscles that pass between, through and around the collar bone, and shoulder blades.

There is no ‘joint’ so to speak and this is what allows the shoulder its 360 degree mobility. Because of this mobility, the shoulder is the weakest joint in the body. It is easily injured and the most common injury among athletes is a rotator cuff tear. When an injury occurs to the shoulder, mobility is limited because pain stops you from moving it in the direction of the injury. The upper shoulder attaches to a host of muscles including the traps, pectorals, and upper back muscles but for now let’s stick with the rotator area. This is where most athletes suffer overuse injuries or like Chris and myself,  high speed impact related injuries. Motorcycle racers tend to fall on their shoulders as they roll to avoid injuring more vital areas of the body. Chris mentioned that the idea for the Rotater came to his business partner, Scott Kay, while recuperating from his own shoulder injury.

Necessity is the mother of invention and The Rotater works as advertised. It helped me in early 2009 get from not being unable to lift my arm even to shoulder height because of the tightness and pain in the injured area. It wasn’t a fresh injury but an old one that didn’t really go away. I am not going to say The Rotater by itself healed me; I was already in a rehab for the shoulder but once I started using it the PTs at the well known rehab started telling me they saw quick improvement. I didn’t mention The Rotater to them but each week when I went to them I was worlds better than the week before. Why, you might ask. The Rotater in my case was an excellent stretching device. A shoulder that is too tight and knotted up will not respond to any treatment. Only when my PT Karen mentioned that I had excellent flexibility in the shoulder did I mention that I was secretly using The Rotator during the rest of the week.

She and the staff became curious as to what a “Rotater” was. When I brought the device to them they were as puzzled as to how to use it. After a five minute lesson they all got the hang of it just as I did. Once past the tender stage of the injury, The Rotater is a good tool to start the strengthening phase of recovery. The device has “cut out slots” on the arm to increase or decrease the resistance on your shoulder as you use it. My unit came with an attachment of surgical hosing which helped me gain some strength back after the mobility came back.

The Rotater will help anyone up to and including elite athletes regain their flexibility post injury and send them into the strengthening phase. This in turn will allow them to hit the weight room and full training sooner than later.  Once back up to full strength, the only drawback with The Rotater is that is cannot be used soley as a strength training device. It then reverts back to a flexibility device.

As I mentioned I had more or less parked the motocross bike and taken up road cycling. According to the head PT, that is about the worst thing one can do to a shoulder or with an injured shoulder. The necessities of road cycling mean one is hunched over, weight on their shoulders with arms extended for several hours at a time.

This body position wreaked havoc on my shoulder when I tried to get on the bike too soon but semi daily workouts with The Rotater had me back to doing light weights, then heavier weights then actual riding. I battled back from almost three months of being out of work and off the bike to a high point of an eighty-five mile, yup you read right, an 85 mile bicycle ride. I still use mine once a week to keep things fresh and moving smoothly. I didn’t write these words as a writer who gets paid to write things, I wrote these words because this is my personal Rotater success story. Thank you Chris Melton for following through with a terrific product in The Rotater.

Who is Michael James?

Michael is an avid motocross rider, a hardcore road-racing cyclist and a freelance writer.  His articles have appeared in:

Disclosure: Michael was provided with a Rotater at no charge.  His testimonial was voluntary and not required. 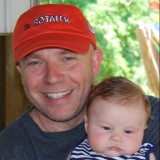 Chris Melton is an entrepreneur (Joint Mechanix, LLC) and the head evangelist for the ROTATER ... a shoulder rehab and performance tool used by physical therapists, athletic trainers, athletes and proactive shoulder rehab patients. You can find Chris on YouTube and Twitter.

This site uses Akismet to reduce spam. Learn how your comment data is processed.

External Rotation with the ROTATER

Internal Rotation with the ROTATER